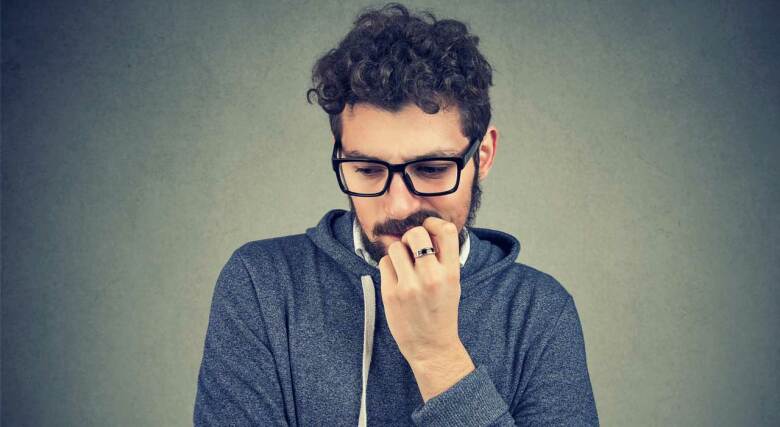 Obsessive-compulsive disorder (OCD) is a mental health disorder characterized by obsessions – unreasonable fears and intrusive thoughts – that lead you to perform repetitive, ritualistic behaviors called compulsions. Both obsessions and compulsions will interfere with every aspect of your day-to-day life and create significant stress.

You may find yourself attempting to ignore your obsessive thoughts, only to inadvertently make you more stressed and anxious. You may find yourself driven to perform these compulsive rituals to try to drive stress away, but despite these efforts, the stress stays or returns at a later time and place. This in turn leads you to have more obsessions and compulsions to act on, furthering the vicious cycle that is OCD.

For many, OCD centers around specific themes and sources of worry; for instance, a fear of being contaminated by germs and then compulsions to wash your hands until they are sore.

You may put off finding treatment for your OCD because you feel ashamed or embarrassed, but millions of people across the globe suffer from OCD and treatment can be quite effective. You are not alone, and relief from the symptoms can be found. Consider reaching out to your doctor or a mental health professional for treatment for OCD.

What are the symptoms of OCD?

Obsessions are characterized as persistent unwanted thoughts, urges, and images that give you stress and anxiety. You may attempt to ignore these thoughts, or find yourself compelled to perform rituals to ease the anxiety. These obsessions are intrusive thoughts, and will pop up when you are trying to focus on other things.

Obsessions often follow the following themes, but may come in other forms:

Compulsions are characterized as repetitive, ritualistic behaviors that your obsessions make you feel driven to carry out. You may find yourself performing these behaviors to try to prevent or stop anxiety related to your obsessions. However, most with OCD find that engaging in these compulsions is only a temporary relief from the anxiety their symptoms bring along.

Common symptoms of compulsions include:

Exactly what causes OCD still is not fully understood by medical science, but there appear to be several main factors that lead to the development of this condition:

Biology — OCD may actually be a result of natural changes in body chemistry or brain functions.

Genetics — While specific genes have not been identified, OCD may be carried on genetically.

Environment — Certain environmental factors appear to act as a trigger for OCD, but more research should be conducted before concluding this is true.

What are the risk factors for OCD?

In addition to the factors highlighted above, there are some factors that may put you at higher risk for developing obsessive-compulsive disorder.

Stressful Events — Going through traumatic or stressful events may trigger the intrusive thoughts so familiar to those with OCD.

Family History — Parents or other blood-related family with a history of OCD or other mental health conditions may increase your risk of developing this disorder.

What are the complications of OCD?

Some problems commonly resulting from OCD include the following, among others:

How do you prevent OCD?

There’s no real way to prevent or cure OCD, but there are innovative new treatment options and lifestyle changes you can make that will help you find relief.

What you need to know to overcome your OCD

OCD is a chronic disorder

The symptoms of OCD can be relieved and your obsessions can be managed, but OCD can not be cured. OCD will always affect you, even if it is only in the background and not really affecting you at any particular point in time.

Doubt and guilt are two of the main symptoms reported with OCD. In fact, before it was called OCD, it was known as the “doubting disease”. It is important to understand doubt and guilt in order to find the right treatment for yourself.

You can not help having an obsessive thought – these are biochemically generated intrusive thoughts. While they may resemble a real thought of your own, they are not — unfortunately, they cannot be “shut off” contrary to popular belief.

Antidepressants can help, but are not a complete treatment

It is only natural to try to find quick and simple answers to your problems, but antidepressants and other OCD medications are not a complete treatment may only reduce up to 70% of your symptoms. Medications vary from person to person, and no one treatment will work for everyone. Medications may also take months before relief from symptoms is felt.

What are the common symptoms of OCD?

Anyone suffering from an anxiety disorder may find themselves having difficulty functioning in their everyday life, and may fall behind at work or at school. Anxiety disorders can also affect your relationships with your loved ones or your physical health as well.

Although symptoms can vary from case to case and disorder to disorder, some of the most common symptoms include:

People with high stress or childhood trauma may be more likely to develop an anxiety disorder, as well as people with a family history of anxiety or other mental health disorders. Anxiety disorders can bring a higher risk of developing depression or heart disease, and some may turn to substance abuse to try to alleviate the symptoms of their disorder.

Ketamine, first developed and approved by the FDA as an anesthetic, is a promising new innovation in the field of OCD treatment. While you may know it as the club drug often abused as Special K, Ketamine is what some doctors are calling the biggest breakthrough in OCD and treatment in Cleveland. When infused at a low dose into the bloodstream, research shows that Ketamine may be up to 80% effective at providing relief for OCD symptoms.

One benefit to Ketamine Infusion for anxiety treatment is its ability to sometimes bring relief to symptoms within minutes or hours, rather than the weeks or months your typical antidepressant may take.

Research into Ketamine infusions for treating OCD is still ongoing, but it is generally believed that Ketamine helps to foster connections between synapses and helps to restore damaged connections between nerves (essentially “rewiring” the brain), as well. Because of this, Ketamine infusions are helpful for not only depression or other mental health disorders, but also chronic pain disorders like Complex Regional Pain Syndrome (CRPS) or fibromyalgia.

Earlier this year, the FDA approved a new nasal spray for treatment-resistant depression, Esketamine (also known as Spravato) based on the Ketamine molecule. Made of essentially a mirror image of own of the molecules that makes up the original Ketamine compound, Esketamine is another exciting new treatment option for those suffering.

The FDA approval of Spravato, as well as the development of new psychedelics research centers by Johns Hopkins, may indicate a shift in the OCD and depression treatment industry, providing innovative new options like Ketamine infusion to those who experience persistent and treatment-resistant OCD.

If you are suffering from Obsessive-compulsive disorder, contact Cleveland Medical Institute for your consultation and discover if Ketamine Infusion for OCD Treatment is right for you.

Are You Ready To Start Your New Journey In Life?

Give Us A Call